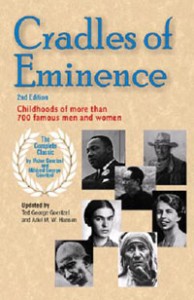 Cradles of Eminence: Childhoods of More than 700 Famous Men and Women (2nd Edition)

This fascinating book contains information about the childhoods of more than 700 famous people, including Walt Disney, Elvis Presley, Lucille Ball, Oprah Winfrey, and Michael Jordon. Dr. Victor Goertzel and his wife Mildred, the original authors of this book, which was first published in 1962, were curious to see whether these well-known people had undergone similar experiences in their childhoods that would explain their later rise to eminence. The authors found that, indeed, there are several common threads in the childhoods of these individuals.

That provocative classic (now out of print) is printed here in its entirety and is updated for the 21st century (in Chapter 12) by the Goertzels’ son Ted, with information from Three Hundred Eminent Personalities (1978), as well as from current published biographies. Parents will feel reassured as they learn about the struggles of other families and the hardships faced by other talented children.